There were many Nordiska titles among the winners and nominees at this year’s Reumert Awards.

Read more about the award winning and nominated plays here…

Why do we take for granted, that every woman has a desire to become a mother? WITH MYSELF IN MY OWN ARMS is a monologue about the difficult choice between motherhood and freedom. A revolt against taboos, gender roles, prejudices and the general feel-good understanding of what motherhood is. “… you could also have a child? No way. What a creepy thought. Then again, I could give birth to a baby. A small slimy beach ball that will inherit my bitch-like superficiality and my poor talents …”

Sarah Kane wrote this highly emotional and gripping play, shortly before she hanged herself in 1999. The title refers to the early hours in the morning when the body is at its lowest and most vulnerable level. So to Kane, 4.48am stands out as a magical moment for death, just like 5pm was it for Lorca. The text is ever so authentic, similar to a suicide note, yet it has a very poetic touch to it.

CAT ON A HOT TIN ROOF

It’s Big Daddy’s birthday and he has invited children and grandchildren to a party. He doesn’t know that he is dying, unlike the rest of the family, and the birthday party turns into a fight about the inheritance behind Big Daddy’s back. The solid family structure crumbles as jealousy, guilt, anger and secrets reveal.

In short: A ordinary celebration in the bosom of the family!

Winner of the Tony Award for Best Play and an Oscar for Best Movie, this provocative work weaves a confrontation between mediocrity and genius into a tale of breathtaking dramatic power. In the court of the Austrian Emperor, Antonio Salieri is the established composer. Enter the greatest musical genius of all time: Wolfgang Amadeus Mozart. Salieri has given himself to God so that he might realise his sole ambition – to be a great composer.

The teacher Ann Sophie Hedvig has unexpectedly showed up at her cousin’s upper class home. The evening offers a business visit and Anna Sophie Hedvig remains silent and modest during most of the dinner until the subject of murder is raised. The question is, whether or not it is allowed to defend your own little world before it is attacked, and whether or not it is the little world that jointly creates the big world. 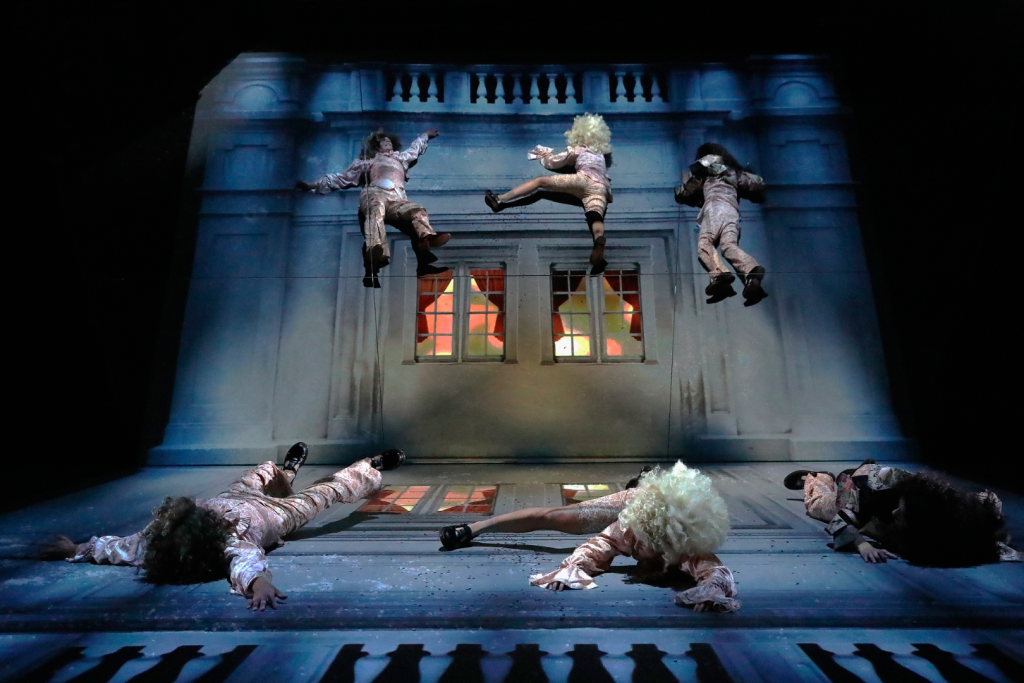 Virginia Woolf’s wild 1928 classic is getting a face lift in this new adaptation. Time, life, sex and death are dissolved in the narrative of the young, beautiful literature-loving Orlando, who’s moving through four centuries of art history, changing sex on the way, naturally.

Orlando is born into the world of Elizabeth the 1st of England. We meet him as a beautiful sixteen-year-old boy. We meet her as a fascinating thirty-year-old woman. We meet him in Constantinople and during an ice winter on the River Thames, and we experience her life in Victorian London. And all the time we are circling with her about the existential basic questions of life: Who are we, why are we, and how do we stop being who we are. At one time a colorful gossip story, a roaring fantasy tale and a breathtaking investigation of the mind.

Young Will Shakespeare has writer’s block… the deadline for his new play is fast approaching but he’s in desperate need of inspiration. That is, until he finds his muse – Viola. This beautiful young woman is Will’s greatest admirer and will stop at nothing (including breaking the law) to appear in his next play.

Against a bustling background of mistaken identity, ruthless scheming and backstage theatrics, Will’s love for Viola quickly blossoms and inspires him to write his greatest masterpiece.

“Although the shit is invisible to most people, it doesn’t mean it doesn’t exist. Or that there is no one to take care of it.” Three cleaning ladies in the lower part of the community wander together and destroys each other’s life lies. DIE PRÄSIDENTINNEN is a tearing roar from the bottom of society. Europe’s garbage can. A roar that is heard even today. The play gives a brutal and humorous voice to those who literally take care of the shit. The style is brutal in its expression – and it is very entertaining.

BIEDERMANN UND DIE BRANDSTIFTER depicts the human incapability to learn, wherefore we often tend to be guilty in our own unhappiness. Why do we let arsonists into our homes? Are we that näive that we even tend to give the arsonist the matches? A dark comedy with food for thought.

We congratulate all the winners and nominees!