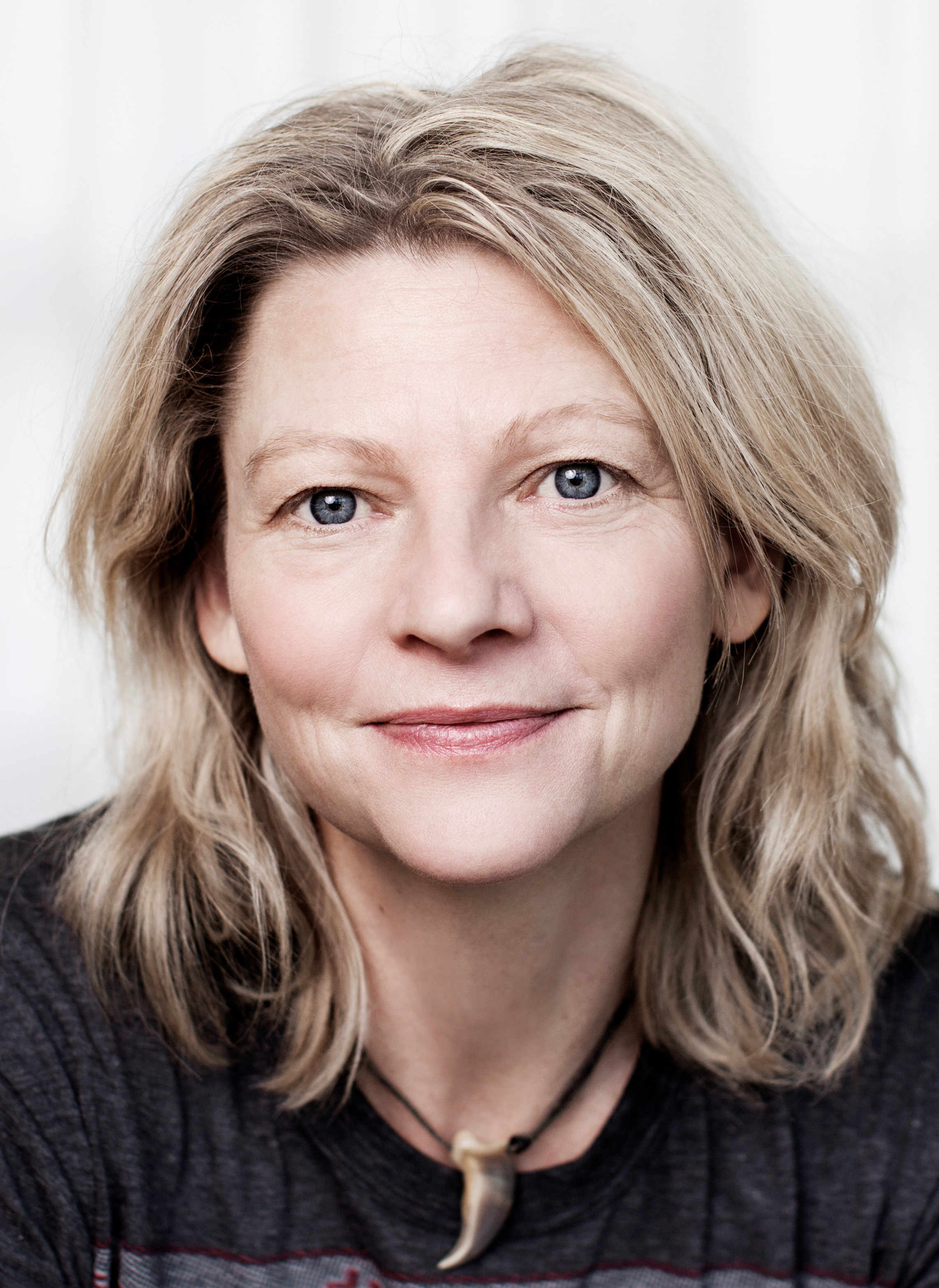 VIVIAN NIELSEN (born 1962) graduated from the theatre school of Aarhus Theatre in 1987 as an actress. She has performed at many Danish theatres, and she quickly became known as a versatile actress. Later, she trained as a director with Ralf Långbacka and as a screenwriter with Dara Mark. Today she is known as one of the most productive and performed Danish playwrights with an impressive number of fine plays. Characteristically for her plays is a magnificent and poetic stage vocabulary with a surprising use of the language – almost Shakespearesque, a reviewer once wrote. Vivian Nielsen has received several grants and acknowledgements for her work, among them a Reumert Prize for her play BRANDES (see below). 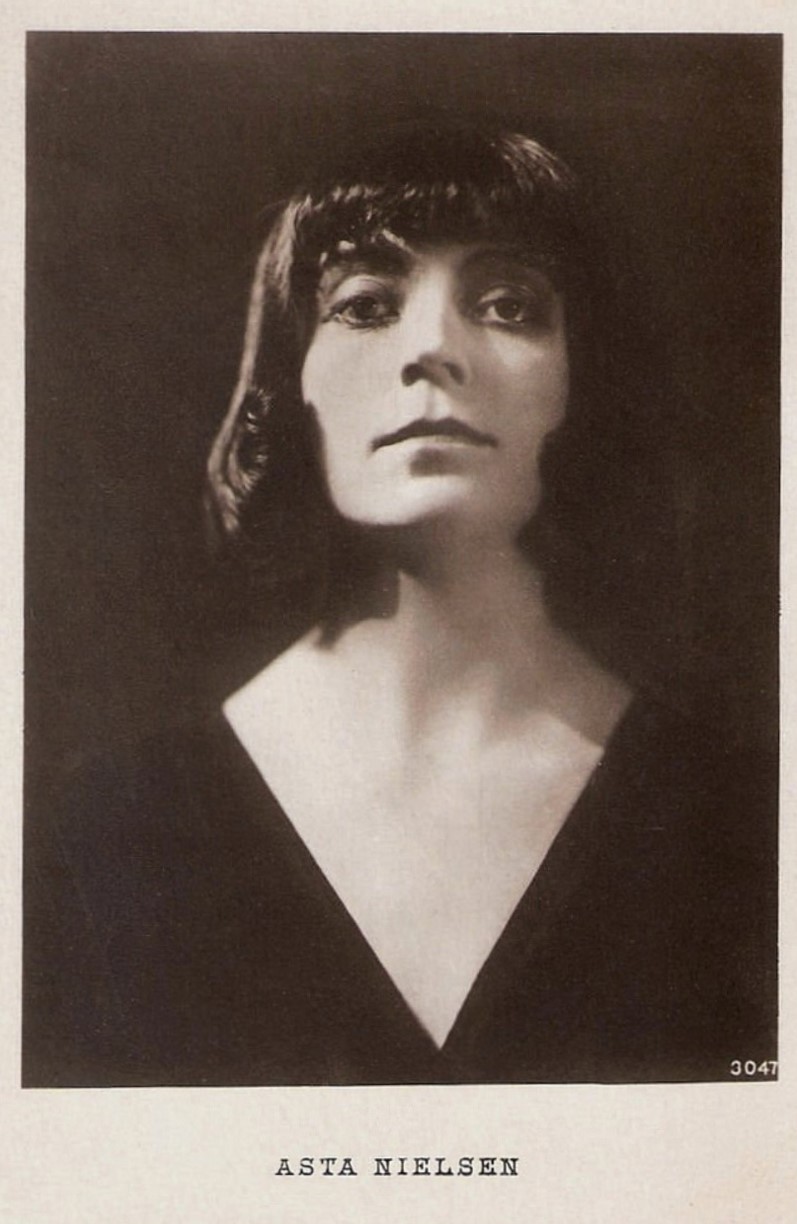 Set in an empty theatre in Nazi Germany in 1936, Vivian Nielsen paints a fascinating theatrical portrait of Asta Nielsen, the first movie star in the world.
Asta and her sister Johanne are escaping Hitler’s Berlin. Johanne is dying and Asta is fighting to keep her alive. Through Johanne, we experience the extraordinary destiny of her famous sister.
Early in life Asta learns to trust her intuition rather than listen to others. She discovers that her greatest intimacy is experienced with the camera lens and begins her exploration of the double nature of acting – in the silent movie era. She dissolves herself into a myriad of characters, seeing transformation as the true nature of her being. This causes conflicts in Asta’s private life. Her two husbands attempt in each their way to capture Asta, but they both fail. Through the eyes of the dying Johanne the play operates with a highly visual concept, bringing the original silent movie clips into the play. Making the stage a platform for re-experiencing the magic of German expressionistic film in the era betwwen the two world wars.

***** “An unusual theatrical experience… excellent play… powerful and captivating theatre… Vivian Nielsen makes imaginative use of the film material, but remains loyal. And my, can she write drama” (Ekstra Bladet) 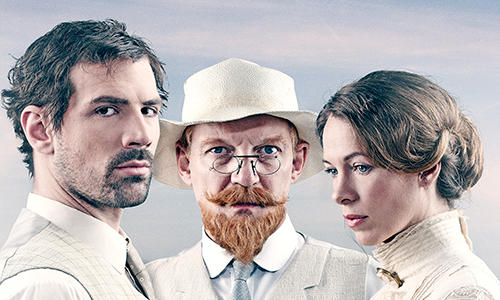 A poignant and well-written chamber play depicting the love triangle of famous Danish/Norwegian painter P.S. Krøyer, his wife Marie, and her lover, Swedish composer, Hugo Alvfén – in the course of a Christmas Eve.
Marie is split between the security of marriage – her husband being a caring yet mentally ill ‘genius’ in his field – and her lover who can offer her nothing but love and a simple life. Following a heavy row, Marie is forced to make a choice.

“Why on earth hasn”t Vivian Nielsen’s sensitive play about the final break-up between the painter P.S. Krøyer and his wife Marie had a revival before now?” (Berlingske Tidende)

In their production of this play the small theatre company Teater Uden Grænser (Theatre Without Borders) invited small groups of audiences to lie down on mattresses with their eyes closed, guiding them through a sort of meditation on thoughts by Danish philosopher Søren Kierkegaard. Apart from the male guide two actresses posing as audience members would during the course of the ‘session’ share their personal stories of the struggles in their love life. 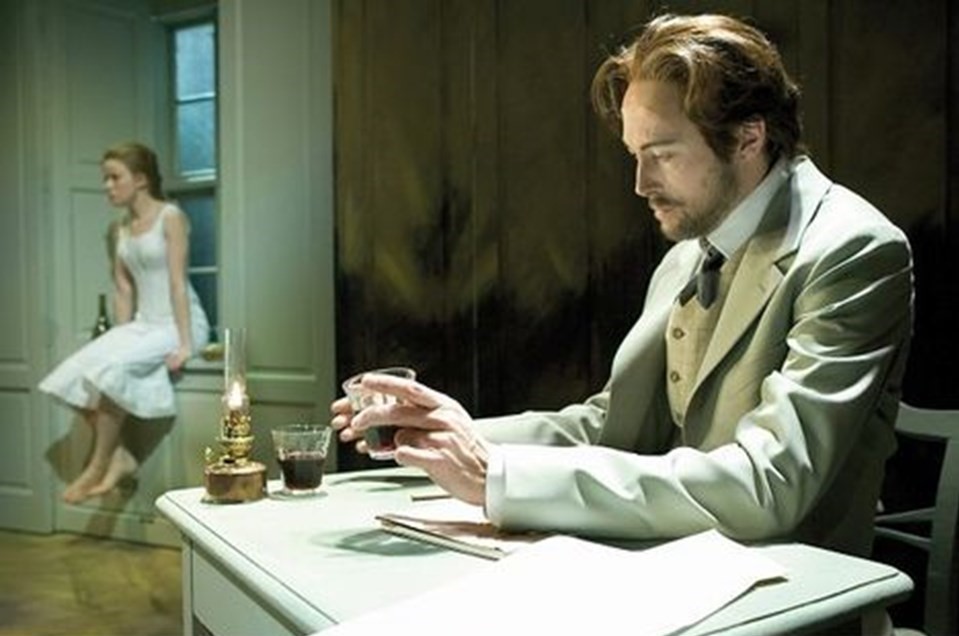 One woman’s fascination with a powerful man

The young woman, Adda Ravnkilde, is happily engaged to a landowner, but things are becoming complicated because of Adda’s sprouting authorship. More than anything else, Adda wants to publish her inner thoughts – much to the dislike of her conservative landowner-fiance, making a break-up inevitable. In Copenhagen Adda meets the famous literary scholar, Georg Brandes. Chasing her dream of publishing her novel Adda asks for his constructive feedback. The meeting with Brandes seals the faith of the young Adda. His whole life Brandes was surrounded by strong women whose encounters with this charismatic man became fateful and – in Adda’s case – leading to tragedy!
Georg Brandes (1842-1927) was the main character of what has been termed as the ‘Modern Breakthrough’ of Nordic literature towards the end of the 19th Century when naturalism took over from romanticism. In her play, Vivian Nielsen depicts Brandes not only as a brilliant mind, but also as a dangerous seducer, who knows how to use the emerging women’s liberation – and especially sexual liberation – to his own advantage: Georg Brandes doesn’t only operate on theoretical levels. His wish for liberalism, which he is fighting so hard for, seems to originate from somewhere deep inside his unfaithful soul.

‘Breaking the Waves’ at The Hungarian Theatre of Cluj, Romania (photo © István Biró))

A story of passion – in every sense of the word

Simple, faithful Bess should love God above all else. But Bess dares to share her love with Jan, an outsider, whom she marries and with whom she starts living a happy life. When Jan suffers a crippling accident, Bess engages in a series of self-sacrifices that she believes will have the power to save Jan’s life. Set in a remote village in the Scotland, Lars von Trier’s 1996 cult film, ‘Breaking the Waves’, shocked the film world and audiences everywhere. Its stark landscapes and naked aesthetics offered no answers, only questions. Why do we turn our backs on the weakest? When does conformity become suffocation? And isn’t faith more than just a word?

****** “‘Breaking the Waves’ is theatre when it’s best. Everything superfluous is removed so that only the naked text remains” (Fyens Stiftstidende)

***** “A harsh, moving and at the same time funny drama about the greatest of all – love” (Jyllands-Posten)

***** “In all its cruelty it becomes – in the stage version as well – an extremely beautiful story of a love greater than death. It’s almost unbearable” (Berlingske Tidende) 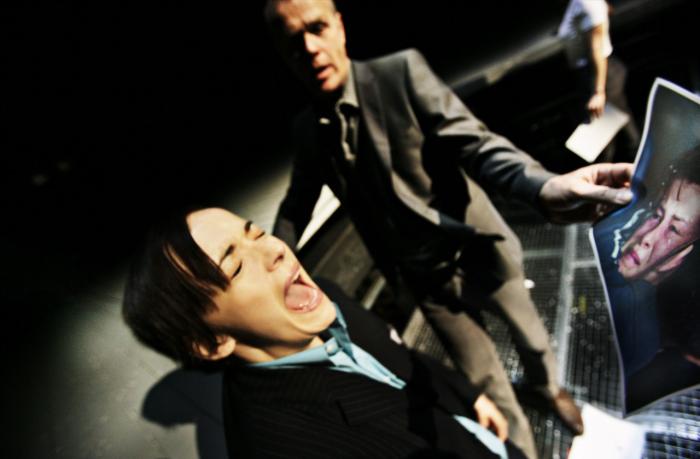 “Jeanne” at The Royal Theatre, Copenhagen, 2008 (photo © Per Morten Abrahamsen)

The story of a strong and well-educated woman who converts to Islam and is accused for being involved in the planning of a terrorist attack in Copenhagen. After an anonymous tip, Joan is arrested. She doesn’t deny that she might be involved, but it’s not as simple as it may look. This is a drama that deals with a contemporary situation and challenges our perception of the constitutional state and our individual right to judge other people. The title refers to one of history’s strongest female icons, Joan of Arc.
Premiered at The Royal Theatre in Copenhagen, 2008:

“Contemporary drama that wants us to understand both the fighters of terrorism and the terrorists. […] Disturbing and delightful […] by one of Denmark’s most exciting and unpredictable playwrights” (Information)

“Very vital, and quite funny, too” (Jyllands Posten) 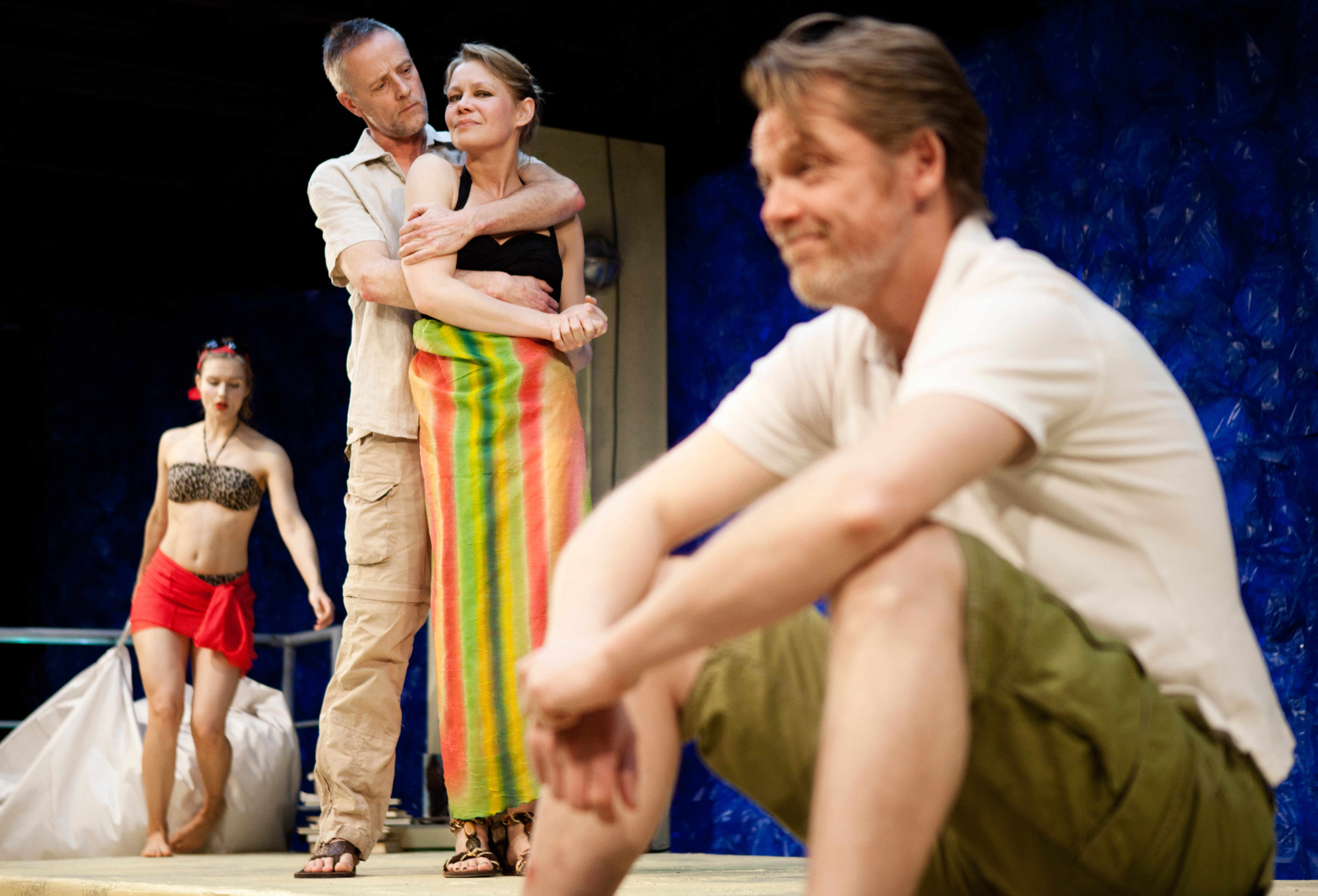 The writer, Adriana, is on a sea cruise to Ecuador with her husband, the press photographer Zeliko. She’s having a crisis: her marriage is hanging in a thread; her mother is sick; and her novel seems to blend in with reality. The cruise is led by the sexy 25-year old Sandra, who practically runs around naked and isn’t ashamed of sharing her escapades with the captain loudly. The nurse, Elisabeth, and her husband, Poul, are also on board. Poul is suffering from a deadly disease and the time has come for him and his wife to live out their dreams, but how does one do that after so many years of reason? While the emotions rise, the ship enters a storm, which forces all the passengers to rethink their lives. A play about all the existential questions that pop up, when you find yourself on shaky ground.

***** “Playwright Vivian Nielsen is a pleasant mix of a poetic dreamer and a down-to-earth cynic. The constant switches between imagination and realism makes CRUISE a stirring acquaintance.”- Fyens Stiftidende 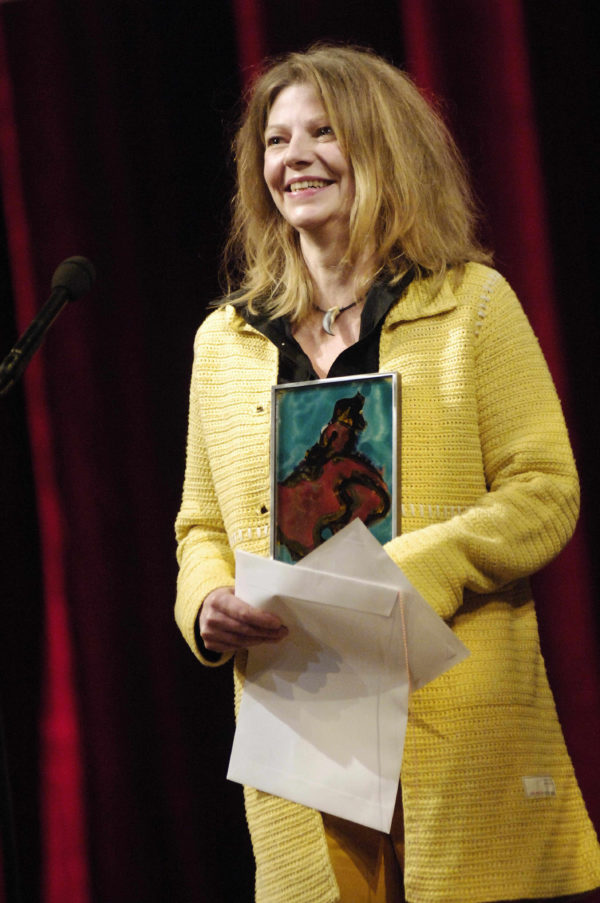