Colin Teevan (born in Dublin in 1968) is a celebrated playwright, translator and writer for television. Apart from his work in the theatre he recently created, wrote and was co-executive producer of REBELLION – a TV series in 2 seasons about the birth of modern Ireland (produced by RTE, Sundance TV and Netflix). Colin Teevan has written several other outstanding pieces of TV fiction which have been broadcast on RTE, the BBC and ITV.

But Colin Teevan has also written a number of excellent plays, most of which are adaptations of novels and classical drama.

Colin Teevan’s most recent play, an adaptation of Ryszard Kapuscinski’s novel THE EMPEROR – about the decline and fall of Haile Selassie’s regime in Ethiopia – completed sell out runs at Young Vic, London, Home Manchester and Grand Theatre de la Ville, Luxembourg in 2016 and won Best New Play at the Manchester Theatre Awards 2017. The play toured New York in September 2018.

The classical comic tales of the good soldier Svejk and his adventures in World War I unfold the story of a small, naïve man from Prague who unknowingly challenges the system and its authorities – facing the absurdities of life and death in the great war with the most deadly weapon of all: his sense of humour!

The dog-trader Svejk is a certified idiot and absolutely not fit for battle. Nevertheless, when the war breaks out in 1914, he is sent off to the front. All around him people are suffering and dying – only the good soldier Svejk seems to be going through all the obstacles without receiving a scratch. So, what is he really? A complete fool or a clever fool?

Since the 1920’s, Svejk has been a symbol of the little man trapped in authoritarian and militaristic mazes. But offering hope to the hopeless, with his indomitable ability to ignore death and suppression, even when staring them directly in the face.

The press about the production of SVEJK at Nørrebro Teater, Copenhagen (2018):

★★★★★★ “A wonderful show, wonderful acting and a most wonderful reason to go to the theatre” (Børsen)

★★★★★ “A string of grotesque confrontations and touching ups and downs. It is a joy to watch.” (GregersDH)

“A wholesome story about the triumph of good over evil. Enormously witty. Svejk lends its audience a presence which is all too often absent from the large stages”(Sceneblog) 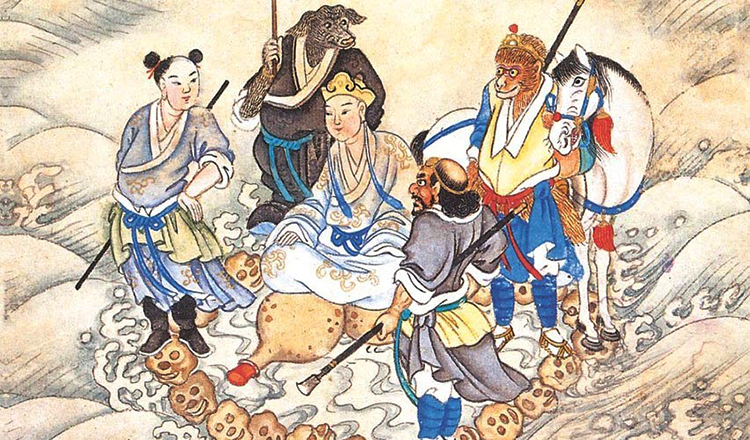 An illustration from the Chinese novel ‘The Journey to the West’

MONKEY!
(inspired by the classical Chinese texts by Wu Ch’eng-en)
2 F / 7 M (of whom at least 4 should have some martial arts training)
Family play / comedy
English text

The play is inspired by the writings of 16th Century Chinese author Wu Ch’eng-en (‘Journey to the West’) – a string of fairytales about a character called Sun Wukong, or, as he is commonly known – Monkey King. In his play Teevan simply calls him Monkey.

As punishment for his ill behavior and the chaos he is constantly causing in heaven, Monkey is imprisoned beneath a mountain for 500 years. To be redeemed he must then guide the Buddhist monk Tripitaka from China and through the Himalayas, on a mystical quest in search of some sacred scriptures. On their journey Monkey and the monk encounter demons, spirits and dragons – some of them trying to stop them, kill them, torture and eat them – others, as the pig-monster, Pigsy, and the river monster, Sandy, turn out to be humans who have been punished with their present forms. Monkey breaks the curses, and Pigsy and Sandy become his true disciples, following him and the monk.

Colin Teevan’s adaptation is brilliant and great fun to watch: It maintains the serious, spiritual content of the story and even succeeds in adding a lot of humor – which works well with children and grown-ups alike.

The press wrote about Mick Gordon’s production of MONKEY at The Young Vic (2001): 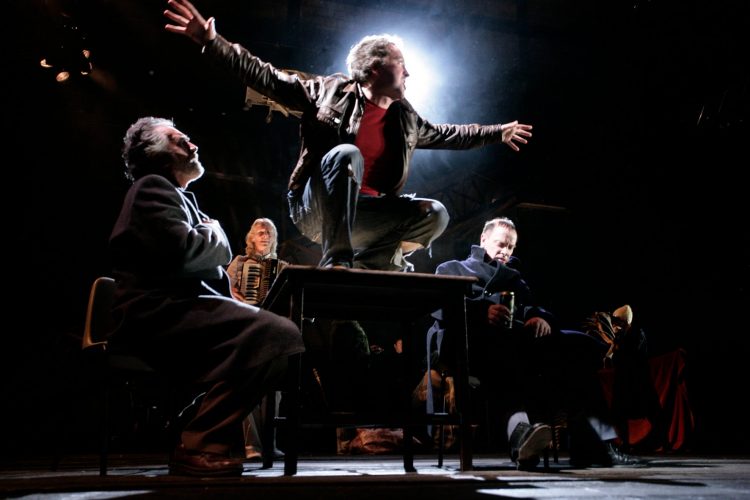 A bold take on a classic:

A radical re-working of Ibsen’s verse play about a young man’s journey into old age and his moral choices. Peer Gynt is a dreamer, a liar and a serial womaniser. Cast out from his hometown, Peer embarks on a wild and astonishing journey in search of fame and fortune that takes him from Norway to Africa and eventually back home again.

Set in modern-day Norway and Africa, Peer’s lust for life is wonderfully expressed and the same goes for his shock when in middle age he feels his emptiness. The brutal and poetic language used by Teevan for his PEER GYNT is Northern English/Scottish/Irish – every other sentence loaded with swear words.

In his adaptation Teevan has found the perfect balance between the supernatural and the realistic: The mountain trolls are members of a weird funfair, Peer’s slave-trading business is modern-day sex-trade trafficking and trade with weapons for African fundamentalists trying to overturn a dictator, and the sinking ship of Ibsen’s play is an airplane in freefall! But the mysteriousness and out-worldly elements are maintained: Peer still has deep conversations with the devil, with death and the ‘Buttonman’.

Two years after its first run, Dominic Hill’s production was revived for a successful run at the Barbican, London, in 2009.

“A brilliant reinvention that’s both irreverent and profound” (The Herald) 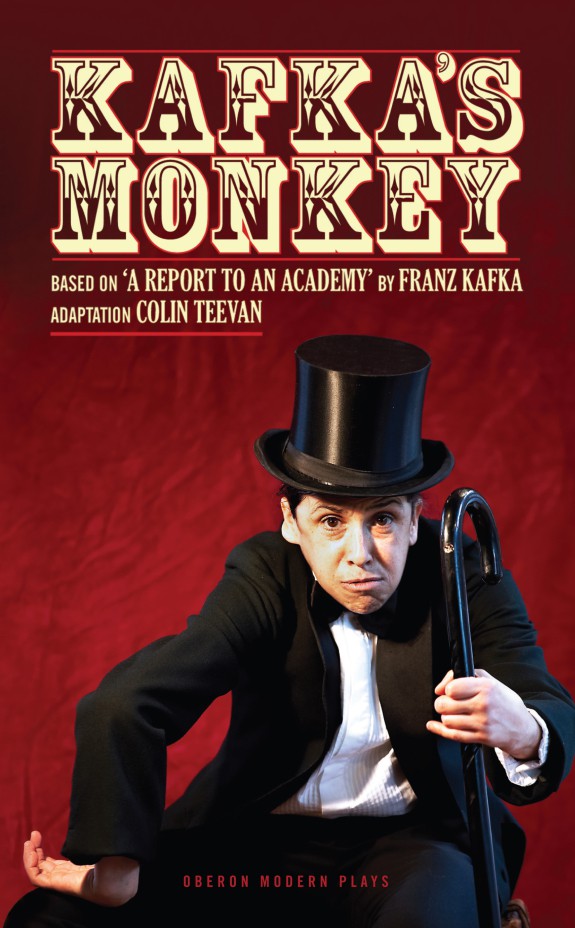 The ’humanised’ monkey, Red Peter, is giving a lecture at an academy – the subject being his transformation from ape to man: From his capture in the African jungle after which he was locked up in a cage aboard a ship, studying and imitating the behavior of the crew, with one purpose only: to be able to escape. At his arrival in Europe, Red Peter must choose between a future in a Zoo – or in a Music Hall. He chooses the latter and becomes a skilled and valued performer. But deep inside his success story Red Peter seems painfully aware of his existence as a tamed animal, which has had to assimilate into the world of the humans – on the terms of the humans, not his own.

The adaptation by Colin Teevan offers a deeply theatrical mix of witty absurdity and tenderness. A playtext infused with Weimer cabaret, dance and stand-up comedy.

KAFKA’S MONKEY places a profound and startling mirror in front of a modern day audience and reveals a world in which humans appear apish and apes the more humane.

”The audience is caught off-guard by the violence that emerges from the midst of laughter. Buried beneath the amusing burlesque of theatre life is an allegory of colonialism that is profoundly disturbing.” (The Guardian) 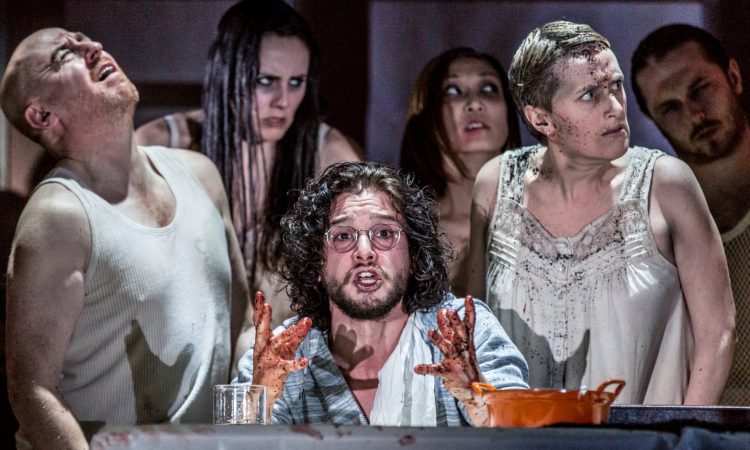 In Marlowes classic play, Faustus’s restless quest for knowledge and his insatiable desire for notoriety drive him to make a pact with the devil in return for the power to perform the black arts. In Colin Teevan’s adaptation of the play, the life-changing decision propels Faustus into a heady, celebrity-obsessed world, as magician and illusionist to the rich and famous. Quenching sexual desires as his power grows, he must question whether the price was worth paying.

Teevan’s version combines Marlowe’s original acts with a brand new middle act, linking the thrilling danger of Marlowe’s opening acts with the profound terror and tragedy of his finale in a radical and darkly comic new take on a classic of the English stage.
Firmly placing this classic story within a present context, the universal truths held in the 400-year-old cautionary tale resonate powerfully with the greed of today’s consumer-led society.

“The play’s rawness becomes almost despairingly Beckettian in tone as Kevin Trainor’s bespectacled, slightly nerdy academic seeks knowledge and power. There is a wonderful sense that evil lurks in every corner and there is no need to conjure it” (The Guardian)