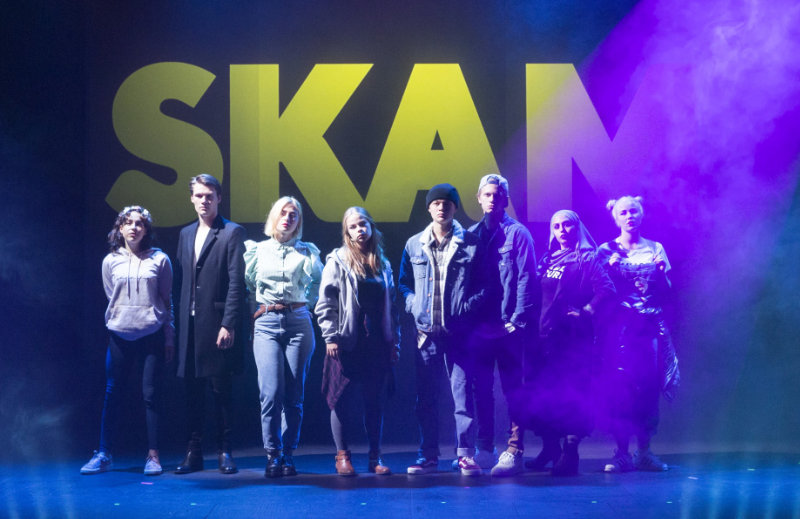 No matter how ’klein’ or ’lø’ you feel, your ‘squad’ will always be there for you!

SKAM 1 is the story of Eva, who has just started in high school. She doesn’t have a lot of friends, but she decides to take matters in her own hands. Eva begins seeking out places and people who can give her new impulses and new friendships. It becomes the story of the formation of a new group of friends – consisting of Eva, Noora, Vilde, Chris and Sana – and about Eva’s complicated relationship to her boyfriend, Jonas. The story about a time in their lives full of major changes and big emotions. About the struggle to find their feet during that difficult first time in high school – with rumors, schemes and back-stabbing threatening them all the time.

Julie Andem’s TV/web-series SKAM (‘Shame’) in 43 short episodes and 4 seasons has often been described as one of the best teen TV dramas ever made. The Norwegian series has been widely praised for its unique ability to describe the world of older teens – at the same time touching, funny and very respectful towards the generation depicted. And in her stage adaptation the Danish playwright Line Mørkeby has indeed succeeded in transporting all of this into the play!
SKAM (the TV/Web-series) has mainly been watched online – since each new episode could be streamed before it had its TV premiere. It is one of the most successful ‘cross-media’ productions coming out of the Nordic countries yet – meaning that its viewers have been able to follow the lives of the characters on other platforms than TV drama – also on blogs, Facebook and Instagram.

NB: On the 14th of September 2018 the second part of Line Mørkeby’s adaptation of the series (SKAM 2) will open at Aveny-T in Copenhagen: This sequel tells the love story of the apparently cool junior high student, Noora, and senior high student William. Noora is ‘drit’-pretty, ‘drit-cool’ but also ‘drit’-vulnerable as she faces huge problems trying to live up to all the expectations.
The press about SKAM 1 at Aveny-T:

★★★★★ “Skam’ is so cool! Also in the theatre! The best TV-series for young people in decades unfolds exuberantly in this stage version which fully lives up to the expectances of its fans.” (MAGASINET KBH)

★★★★★ ”Mission accomplished: The youngsters can effortlessly transmit their love for the cult-series SKAM” (Berlingske Tidende)

★★★★★ ”Respect is too poor a word – it’s almost ingenious. No need to think twice: Off to the theatre, now. As in right now” (Ekstra Bladet)