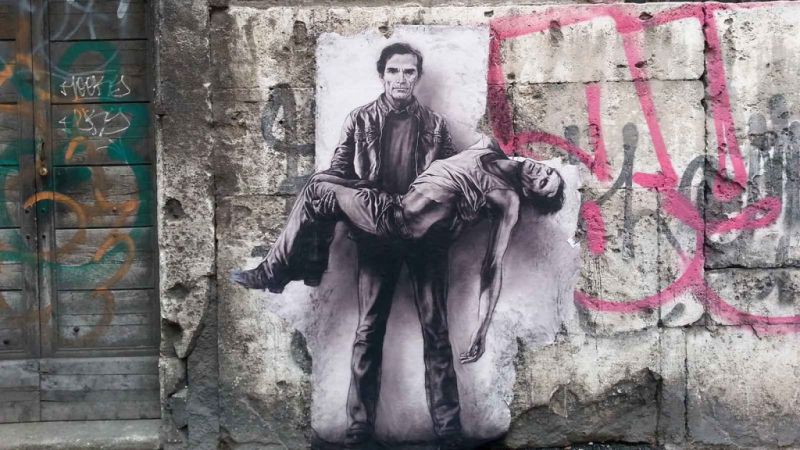 Street art mural by Ernest Pignon-Ernest depicting the living and the dead Pasolini.

Pasolini has been called the most important Italian poet since D’Annunzio. His most important collection of poems is The Ashes of Gramsci (1957). In his poems and novels Pasolini praised the Roman sub-proleariat, in which he dreamt of finding an uncorrupt way of life in the middle of a corrupt consumer society which he detested.

Among his films are Accattone, Mamma Roma, The Gospel According to Saint Matthew, Hawks and Sparrows, Oedipus Rex, Teorema, Medea (starring Maria Callas), The Decameron, Canterbury Tales, The Arabian Nights, and Salo: The 120 Days of Sodom.

Pasolini also published volumes of political and cultural criticism. His murder has sometimes been termed an assassination, with evidence that it may have been politically motivated, or else a violent reaction to his homosexuality.

The story unfolds in six short episodes, in the bedroom of A MAN and A WOMAN – a middle aged married bourgeois couple.

The two first scenes take place on an Easter night: The couple prepares an extreme sado-masochistic ritual. THE MAN plays the part of the torturer and brutalizes THE WOMAN, who gladly accepts the acts of violence done to her. Their ritual reveals the true nature of the most basic social relations, making the couple realize how violence and power are used to maintain all social relations. After having performed the ritual there is no way they can submit to customary power structures – and THE WOMAN kills herself!

In the remaining scenes THE MAN tries – to no avail – to repeat the ritual, this time with a prostitute playing the part of the woman. But the division of his two roles – his paternal authority on one side and his insatiable lust for life on the other – pushes him towards suicide, too. After his final monologue, which he addresses directly to the audience, he hangs himself.

This is Pasolini at his most uncompromising and aggressively critical of all kinds of social sentimentality! 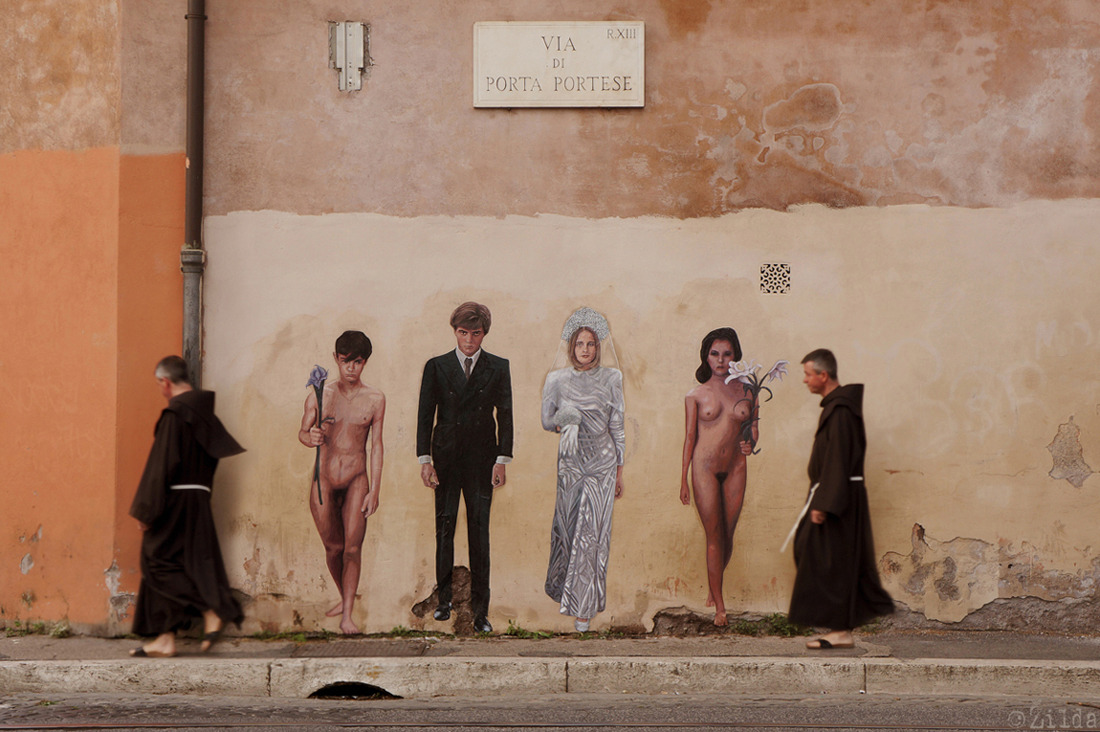 CALDÉRON
7 F / 13 M (can be performed by a cast of 10)
Drama
Italian original text, Swedish translation

Fascist Spain, 1967. Rosaura, the main character, wakes up three times with no memory of her previous life/lives. Pasolini took his inspiration from the classical Spanish play ‘Life is a Dream’ by Calderón de la Barca to launch a fierce criticism of institutional power and the bourgeoisie.

Calderón is a provocative work of an absolutely contemporary intensity, despite being written in 1966/67.

Fabrication is a compelling work presenting us with a father/son relationship – but not a typical Oedipal one: In this case the son is not in competition for his mother, indeed this is not about the son at all. It is all about the father – a successful and philanthropic Milan industrialist – who is haunted by a dream he can never completely remember on waking, a dream that still haunts him twenty years later, long after it has destroyed his life. It makes him physically and mentally ill, driving him to seek help in religion.

The father – who sometimes converses with the ghost of Sophocles – is challenged by the son’s independence. He wants his son to take his advice and follow in his footsteps. The boy is blonde, unlike his parents, so he questions his paternity. At the same time, the father becomes obsessed with his son’s sexual activity, and he plots an opportunity to demonstrate his own sexual prowess – he becomes fascinated by his son’s cock.

This is not Pasolini exploring a homosexual theme – the father is so challenged that he believes his son’s emerging virility is making him impotent. Although hard to comprehend there is a truthfulness about the irrationality of the fears and frustrations of this tormented man. Fears that lead to madness and what he himself calls ‘regicide’.

PYLADE takes the fractured friendship of Orestes and Pylade, from Aeschylus’s Oresteia trilogy – in which Orestes, with the help of his friend and cousin Pylades, kills his mother and her lover to avenge the death of his father – to study totalitarian (mainly communist) systems’ inherent corruption and failures. The standoff between Orestes and Pylade (following Athena’s introduction of a new matriarchal-patriarchal society) represents the problems created after breaking down bourgeois society and attempting to rebuild a utopian state.

The schism between populist ideals and the inevitability of corrupt leadership is the thrust of the play, with Orestes representing established leadership and Pylade rejecting his heritage completely to side with the peasants. But the conscience of the people (the Chorus) understand that it all amounts to ruin: “He wants to take down our institutions: But not to substitute them for others. He wants to destroy and that is all.”

A poetic, tragic meditation on democracy, consumerism, and the struggle for real social change.

The press said about The Great Jones Repertory Company’s production of PYLADE (at La Mama, New York City) in 2015:

“Pylade is the tragedy of the hubris of the liberal elite and the nihilism of the disenfranchised — a tragedy our world is presently living through again as people across the globe increasingly turn to extremist ideology….we feel the full brunt of this tale of cyclical cataclysmic confrontation” (TheaterMania)